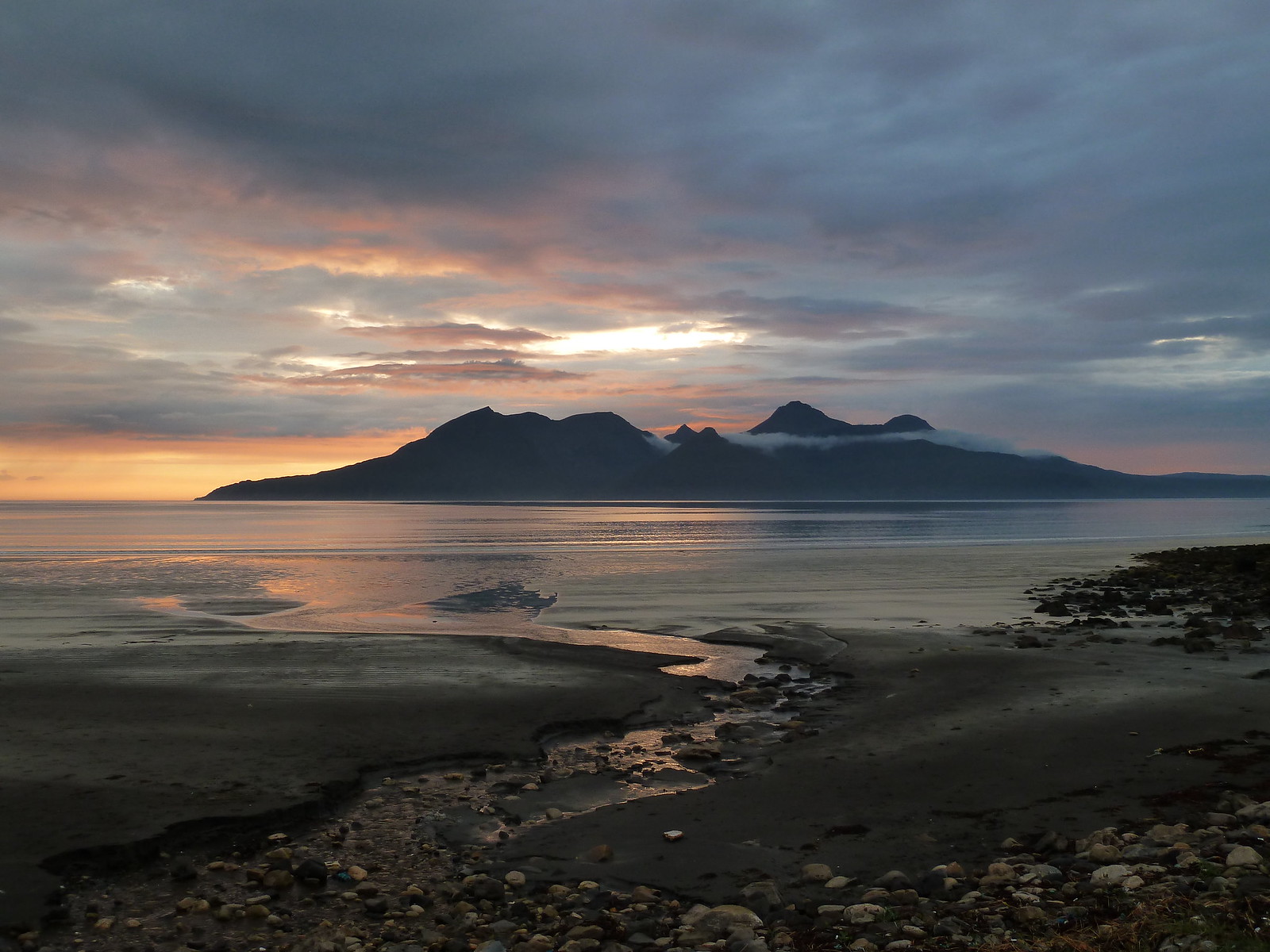 For the May bank holiday weekend we headed up to the west coast of Scotland for an exploration of some of the stunning islands of the Inner Hebridies. Our plan was a three day backpacking trip on the Isle of Rum taking in the 'Rum Cuillin traverse', followed by a stop off on the Isle of Eigg before our return.

We caught an afternoon train from Lancaster to Glasgow, then on to Mallaig where we arrived shortly before midnight and wild camped out side the town.

The next morning we were on the early Caledonian MacBrayne ferry to Kinloch on Rum which took just over an hour, giving us the full day ahead of us to start our traverse of the ridge. It's a great place to go on a bank holiday as it is still relatively quiet compared to other mountaineering destinations, we only saw 5 other groups the whole day.

The Isle of Rum is a designated National Nature reserve and managed by the Scottish Natural Heritage. Apart from its fantastic wildlife it is also a jem for geology enthusiasts, the Rum Cuillins were formed by an ancient volcano.

The traverse takes in 5 summits, two being Corbetts (mountains over 2500ft), and offers spectacular views across the sea to the Outer Hebridies, Isle of Skye, the Small Isles, and the main land where you can see Ben Nevis still holding onto some snow.

The scrambling on the ridge is straightforward and unexposed if you take the easiest line, however the easiest line is not always obvious and it's worth printing out a description of the route from a guide book to use along side your map.

After the first summit Hallival, there is a nice grassy ridge section before the next top Askival, which is the highest of the corbetts on Rum at 812m. The standard route avoids the climb directly up the continuation of the ridge which is graded as a 'Mod' climb, although it looks harder than that! Instead traverse along the path to the left and ascend that way. A much nicer route when you have a big haversack full of 4 days backpacking gear and food!

There is then a large descent of just under 400m to the col before re-ascending to make the third summit of the ridge, Trollaval. Here you can see the burrows of the Manx Shearwater bird which lend their troll like sounding calls to the name of the mountain. We left our bags on the first of the mini tops of Trollaval and climbed along a short way to gain the highest of the two tops which offered more exciting and exposed scrambling.

From here we scrambled down to the col, Bealach an Fhuarain. Here we decided to save the rest of the ridge for the next day as the summits had now disappeared in cloud, and as we had little to do the next day and the weather was set to be great again we headed down to our wild camping destination by the Mausoleum at Harris on the south west corner of the island. We arrived just in time to put the tent up and cook before sunset and take some photos of the fantastic lighting on the ridge and out over the ocean.

The next morning we were off back to the col and back on to the main ridge. From here the route looks rather ominous going directly up, which is climbing territory, but again there is an easier route around the right hand side of the ridge where you then cross it half way up, onto the left side, and scurt along a scree slope to the summit of Ainshval (the second Corbett of the ridge), this is easier when you are on it than what it looks like from a distance. Unfortunately the weather wasn't quite as good as we expected first thing and so were in waterproofs walking in the wet cloud and strong winds. By the time we reached the final summit, Sgurr nan Gillean, which was completely dry on the ground, the cloud beneath us in the corrie that had been driving over Ainshval had started to break up. We were completely sheltered sitting a few meters down from the edge of the impressive Nameless Corrie on the East side of the ridge, and lounged comfortably in the warmth of the sun here for a good hour waiting for the cloud to completely blow away and give us the excellent views over to the Isle of Eigg and outer Hebridies. Time to head on and we walked along the west ridge to Ruinsival, a rarely visited top on the ridge because of its 'out and back' location to those doing the standard route, but well worth it, then we were down at Harris again and packed all the gear up.

We decided to move camps and experience Kilmory Bay on the North end of the island, so walked along the 10km track which is well enough surfaced to roll along at a good pace, nearly good enough for a road bike! This was well worth the walk! The beach was stunning with a fantastic view of the Skye Cuillins and sunset over the water. It is however a research area for red deer where there is a large herd, so the trousers were tucked into socks and insect repellent put on in defence of ticks! We camped amongst the sand dunes where there was not a tick insight, but we picked a few up on our trousers walking through the grass on our exploration away from the beach and quickly flicked them off having heard the recent news of Lyme's disease which is carried by certain species of tick.

The next morning we packed up camp and walked back to Kinloch where there is a nice village hall with tearoom and shop to refresh before heading on. The route can be done in one day taking in the ridge, then dropping down to Glen Dibidil and traversing back to Kinloch, where there is a hostel or campsite to stay in. This is a 21km walk with 1847m ascent, taking between 12-14 hours.

We then caught the afternoon ferry to the Isle of Eigg where we were booked onto a campsite near the Bay of Laig. We treated ourselves to a delicious meal at the Lageorna restaurant with views over Laig beach and across to the Isle of Rum. This beach gives fantastic views of the Rum Cuillins and is a great photography spot for those into their sunsets!
The next morning we walked a short way to the 'Singing Sands' the next beach along, which gets its name from the noise made from walking on the sand, as the coarse sand particles rub against each other it produces an amusing sound as you walk. We had a swim in the sea and then it was time to walk back over to the other side of the island for the 5pm ferry. We were on the train at Arasiag by 7pm and settled on the sleeper from Fort Willaim for the night's journey home. Very satisfying when you've had a great weekend walking in glorious weather to be sat comfortably on the train back with it pouring with rain outside! Well timed!