Valnontey and the Aosta Valley
Posted by Imogen Fisher on September 16, 2014

General
alps gran paradiso italy mountaineering sunrise
Share on
This summer we met up with the Alpine Club in Valnontey for two weeks at the beginning of August, a great base to bag some peaks in the Gran Paradiso National Park! It is a very pretty and relatively quiet area of the Alps. The peaks we did included, Gran Serra, Punta Rossa and Gran Paradiso.

We travelled by Bus and Train from Lancaster over two days with two massive rucksacks each of all our camping and climbing gear. We broke the journey overnight in Paris before continuing onto Turin, Aosta, and finally the Cogne valley to our campsite in Valnontey. Unfortunately it was pouring down with rain when we arrived on the Saturday night, so we warmed up in the Camping lo Stambecco bar with hot chocolates and free homemade gin from the very kind campsite owner before pitching the tents.

The next morning we explored the valley and got the free bus down to Cogne, a 10 minute ride which runs every half an hour, most convenient! Here there is a good supply of everything you need including gas and meths in the outdoor shops. So we stocked up for the next few days as the following day we planned to start the walk for the Gran Serra.

Some of the Alpine Club had already been out there for a few weeks, which was very handy as they gave us lots of useful advice for the peaks we were going to do. They recommended the Grand Serra (3552m) as a good acclimatisation peak, so we went for this on Monday and Tuesday before the weather turned wet again.

So Monday saw us walking approximately 900m ascent to the Refugio Sella Hut where we stayed overnight.

Tuesday morning we woke up at 4.30am and were off by 5am, walking in the dark for the first hour. We then got to the first glacier, Ghiacciaio del Loson, just as the sun came up providing a beautiful glittery snow plod up. It seems there was a bit more snow this year than normal, which worked to our favour for this particular route, as the normal route for the transition from this glacier to the next, Ghiacciaio Gran Val, goes up a steep rock/snow slope to the left of the main snow slope which is very steep. It was more snow than rock this year, so saved on the crampon blunting a little. This route is graded an F but the slope is about 40 degrees and more like an easy PD. From here it was a gentle plod up the second glacier to the bottom of the rocky steps to the summit. This is quite an easy scramble to the top, especially if you keep left and ignore the arrows around to the back of the summit block. The summit rocks are spectacularly positioned for an airy feel whilst you soak up the 360 degree view including the Grivola, very impressively shaped Herbetet and Torre del Gran S.Pietro. Time to head down, Lorna skipped down the rocks whilst we faffed with rope to make a belay down, not because it was necessary but because we'd carried the thing all the way up there and not used it! If you're not very confident down climbing it could be worthwhile taking a rope with you on this one as it can be covered in verglas if you've set off early enough and feels quite exposed. We were well on our way down as the clouds came in and covered the tops and made it back to the hut around lunch time. From here instead of going straight down the path back to our base in Valnontey, we opted for the more gruelling descent route adding another 8km onto our day. This was a very pretty high level traversing path around Mt Erban and then the very long way down into Cretaz. Well worth it though! 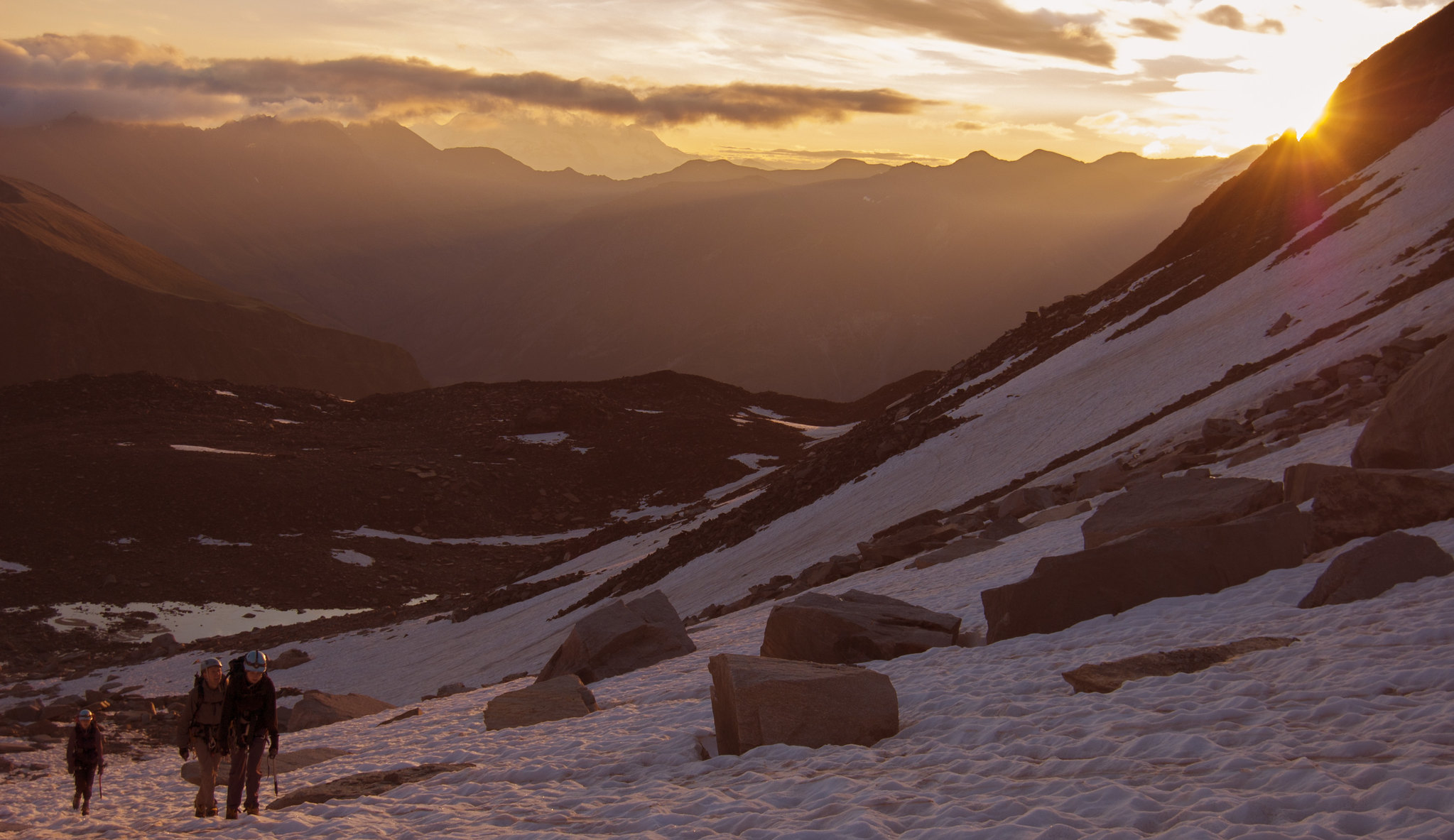 Sunrise on the Glacier du Lauson. 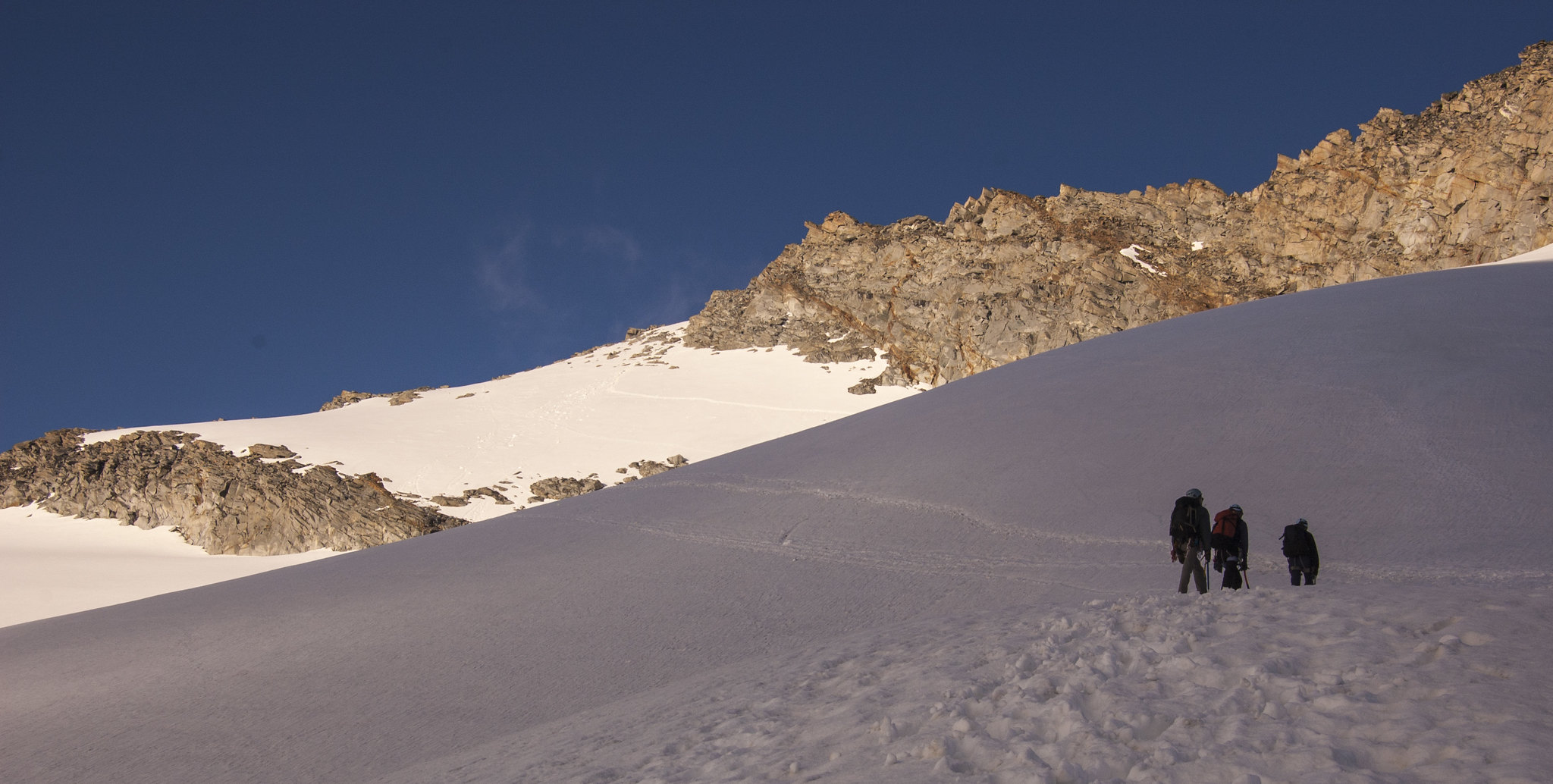 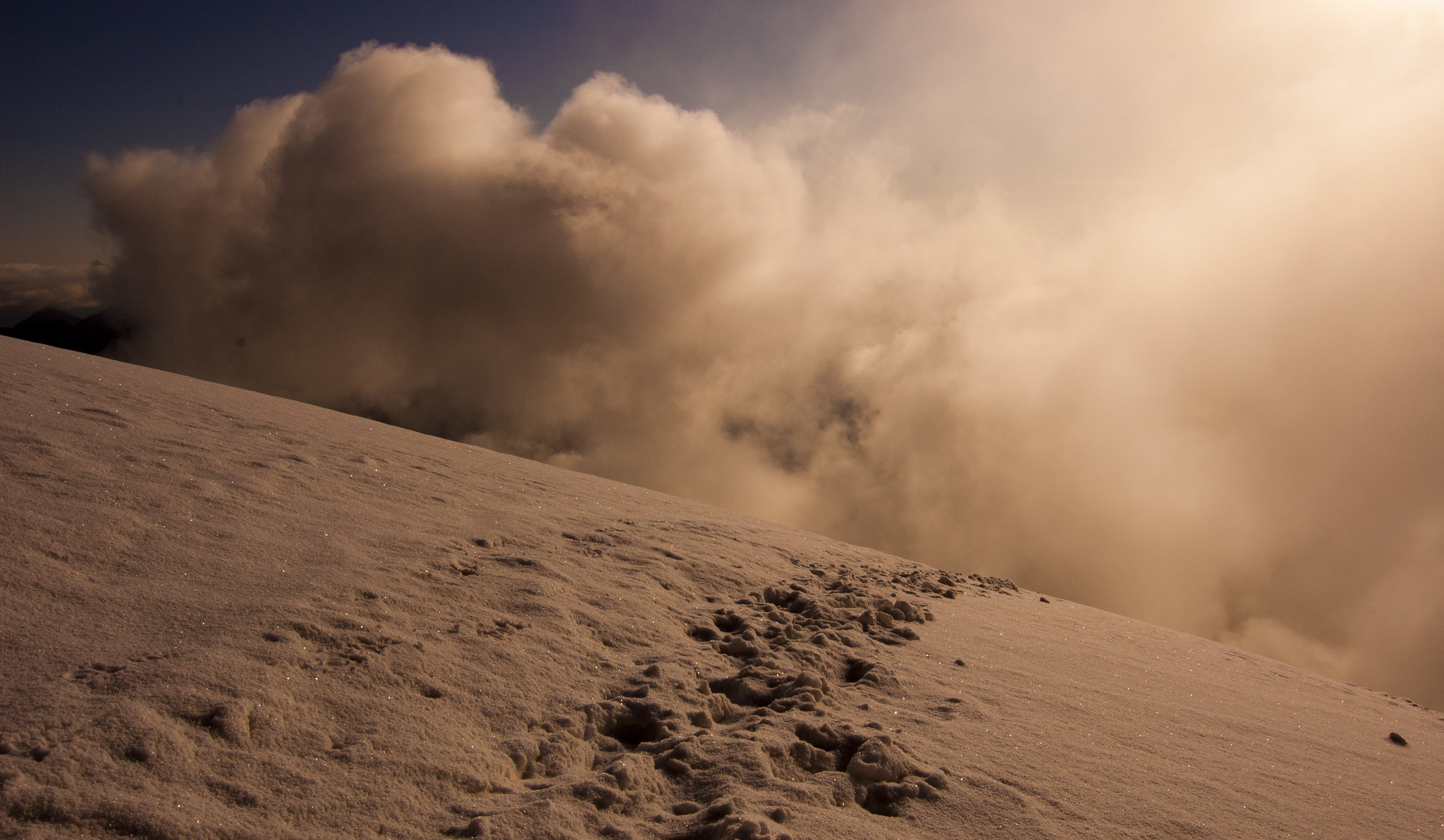 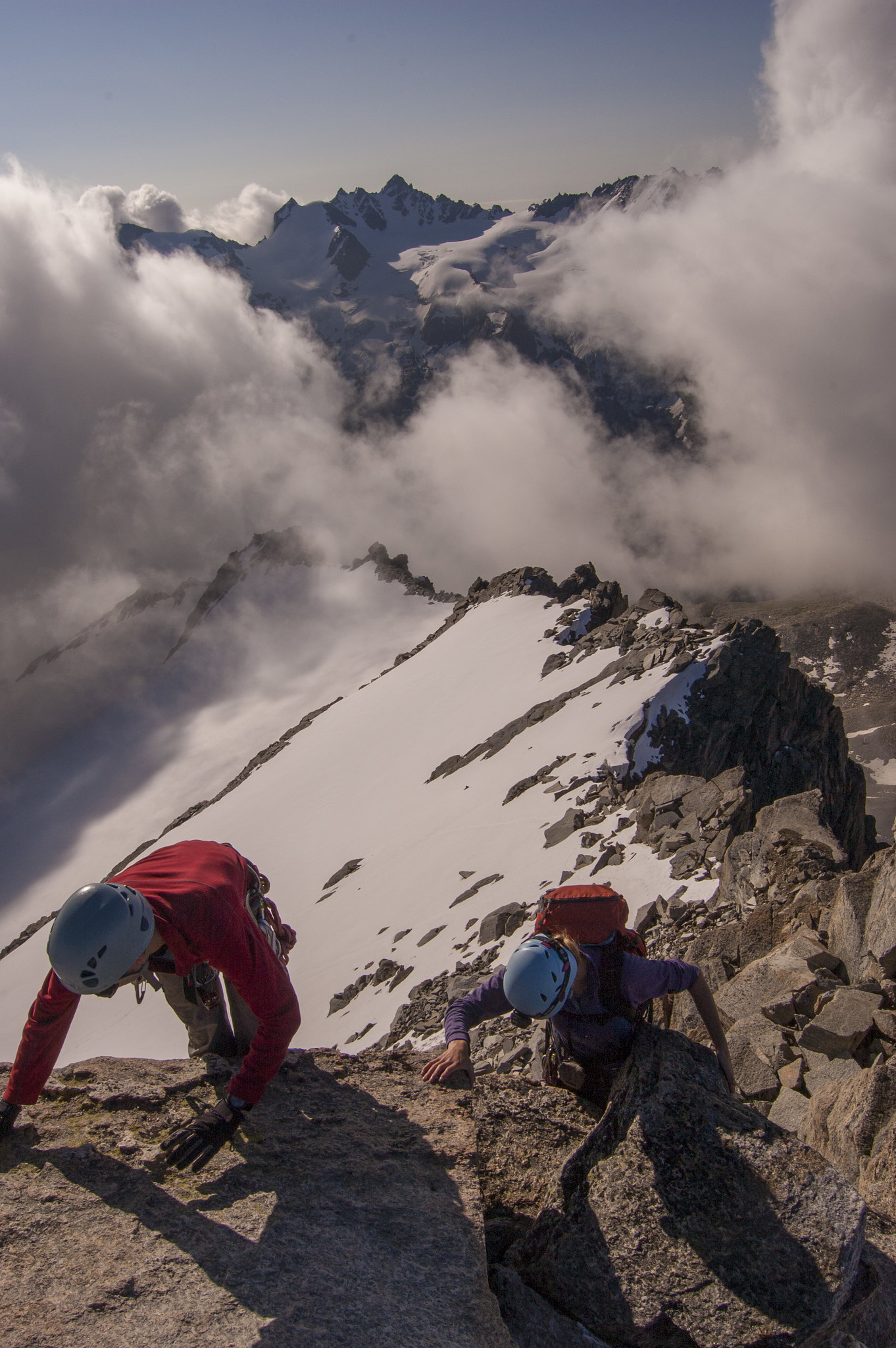 Final few moves onto the summit. 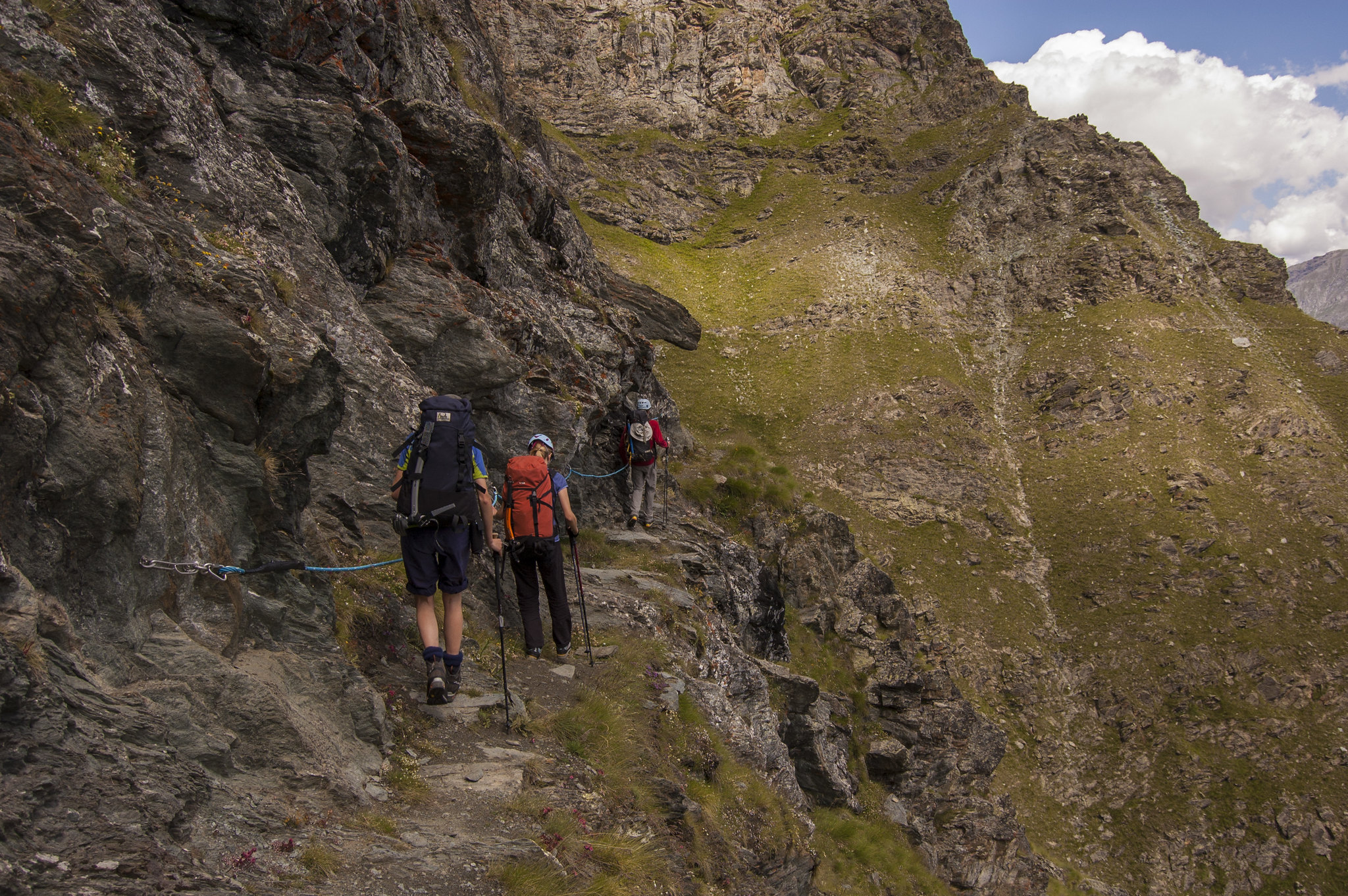 Traverse path to Cretaz.
Wednesday was the perfect rest day weather, raining on the tops but nice in the valley, so we got the free bus to Lilaz and explored the wonderful cascades there. These are the famous waterfalls in the Cogne valley that get a lot of attention in Winter when they're frozen for ice climbing. Hard to imagine them freezing when you see the force behind them in summer! Well worth a visit, very pretty and idyllic.

Thursday and Friday were set to be nice again so we headed for the Bivouac Gratton Hut with Punta Rossa (3630m) as our aim. This was a 1700m ascent slog to the hut but meant we only had 400m ascent left the next morning! The hut is in a great position looking over the Ghiacciaio del Trasso with views to Mont Blanc and the Matterhorn in the far distance. It has 9 beds, which would be rather crammed if all of them were in use, but luckily we had it to ourselves, and by the looks of the visitor book it is rarely full as the Alpine Club had told us, so we didn't bother lugging up our sleeping bags and bivi bags like we normally do just in case. 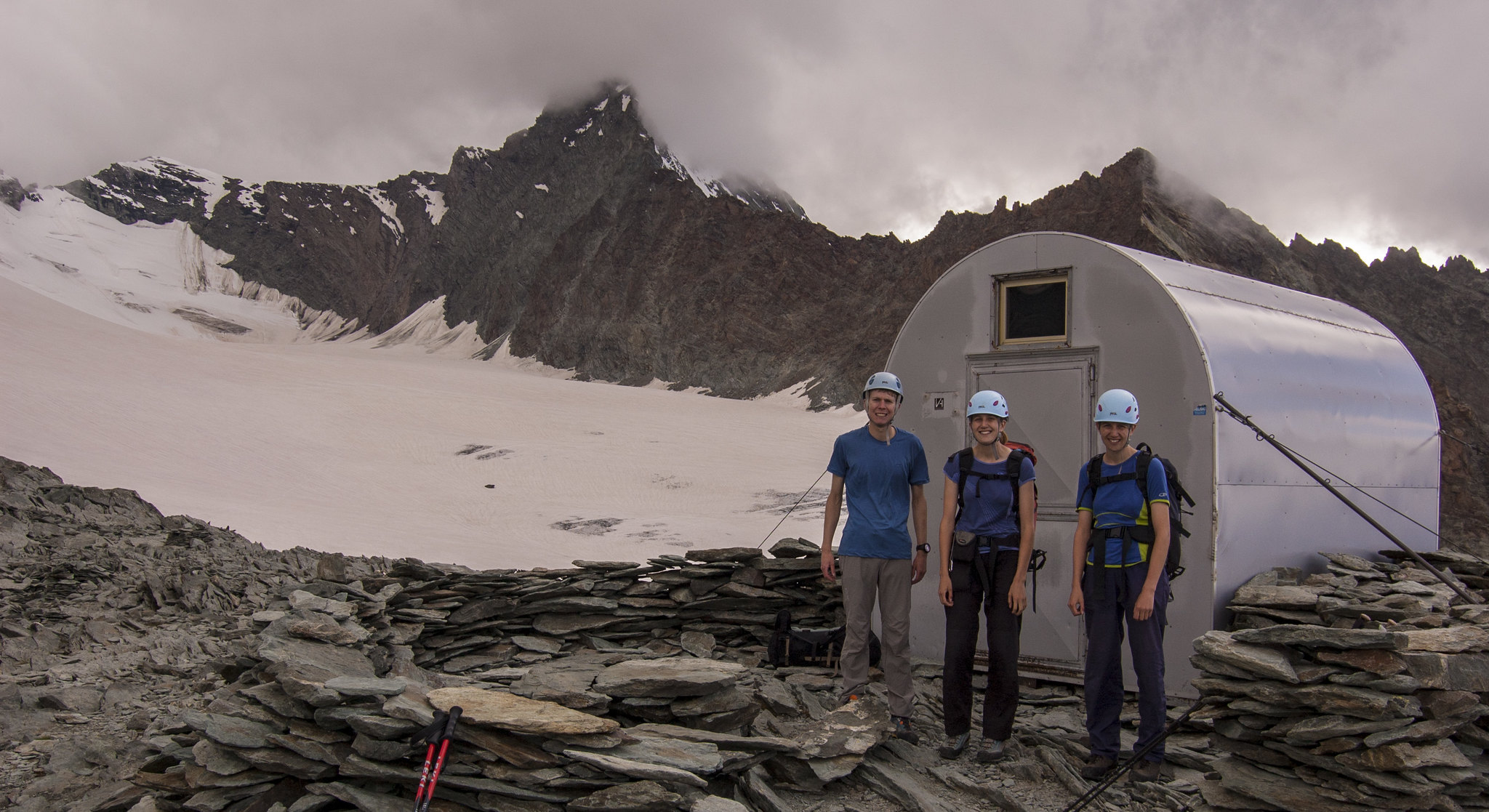 Bivacco Gratton with La Grivola in the background.
We set off at a relatively leisurely start of 5.30am for the summit as it wasn't far to go and not technical. We had the top to ourselves with again fantastic views right across the Alps where we could even make out the distinctive fin shape of the Barre Des Ecrins in the distance. We dropped down into the Gran Lauson valley and walked back to the campsite, just in time before the rain started to sort gear out and head to the pizza place with the Alpine Club for their goodbye meal.

Sunrise over the Switzerland. Spot the Matterhorn! 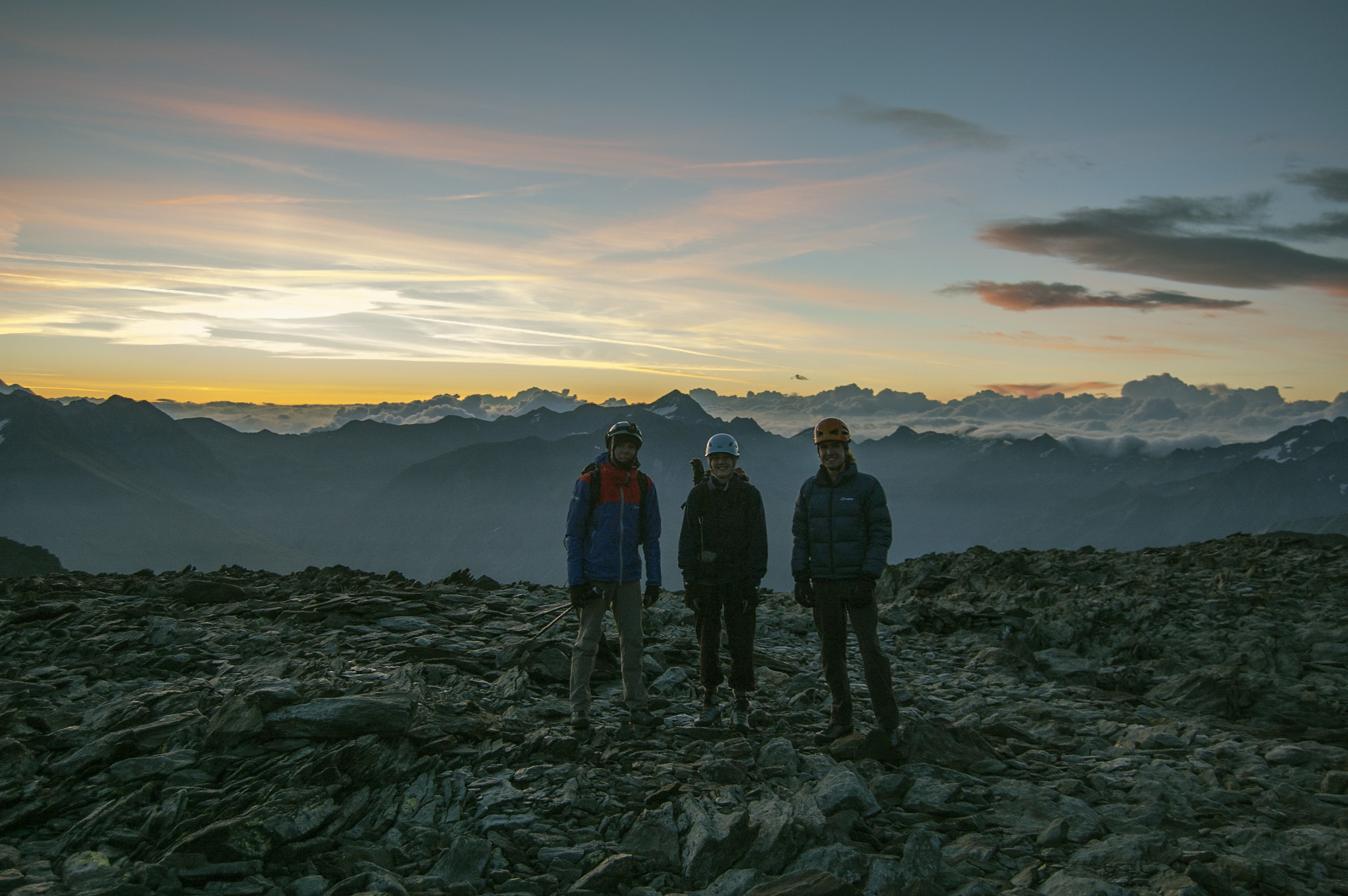 Outside the hut first thing in the morning. 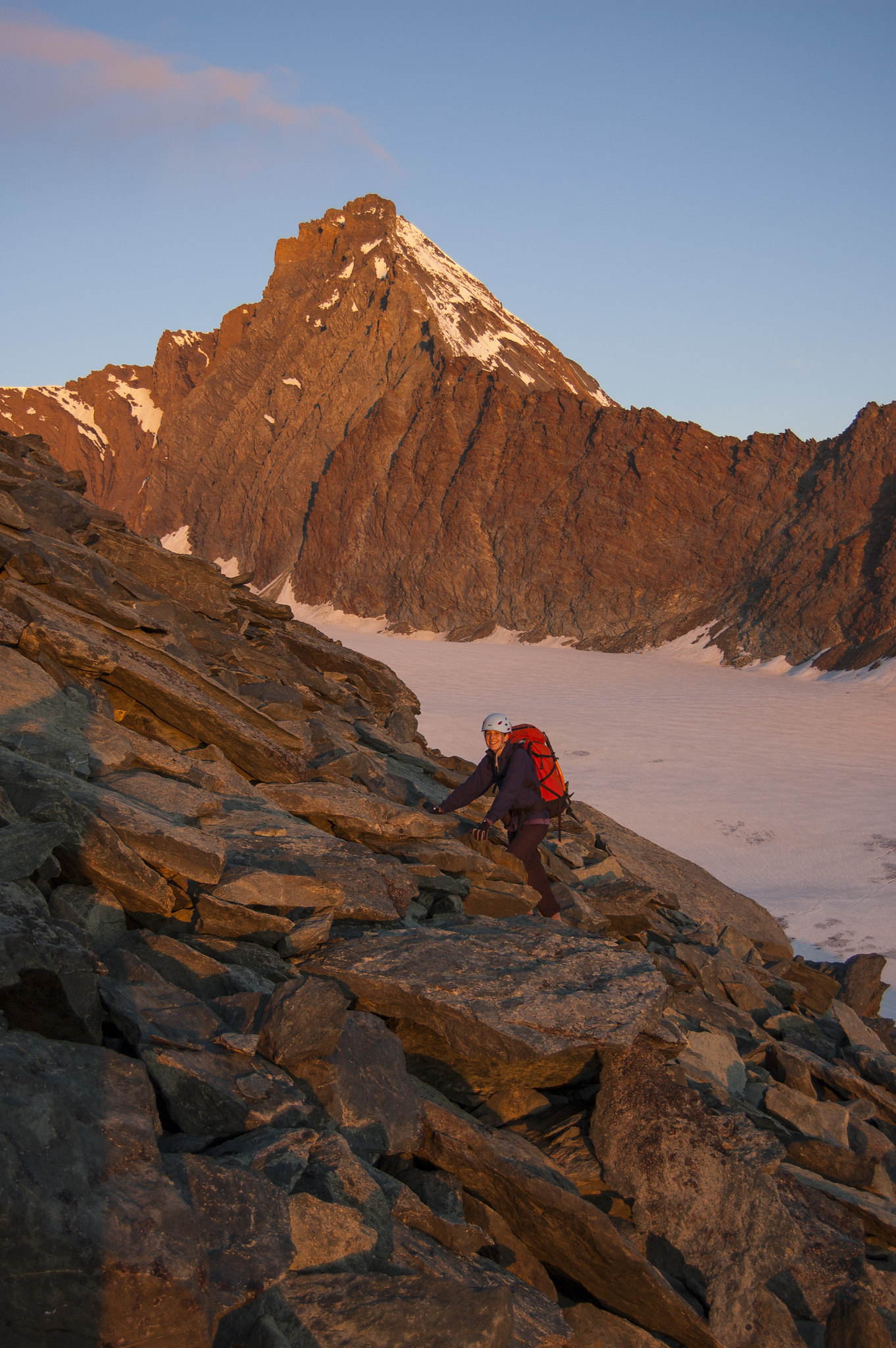 Imogen with La Grivola in the background. 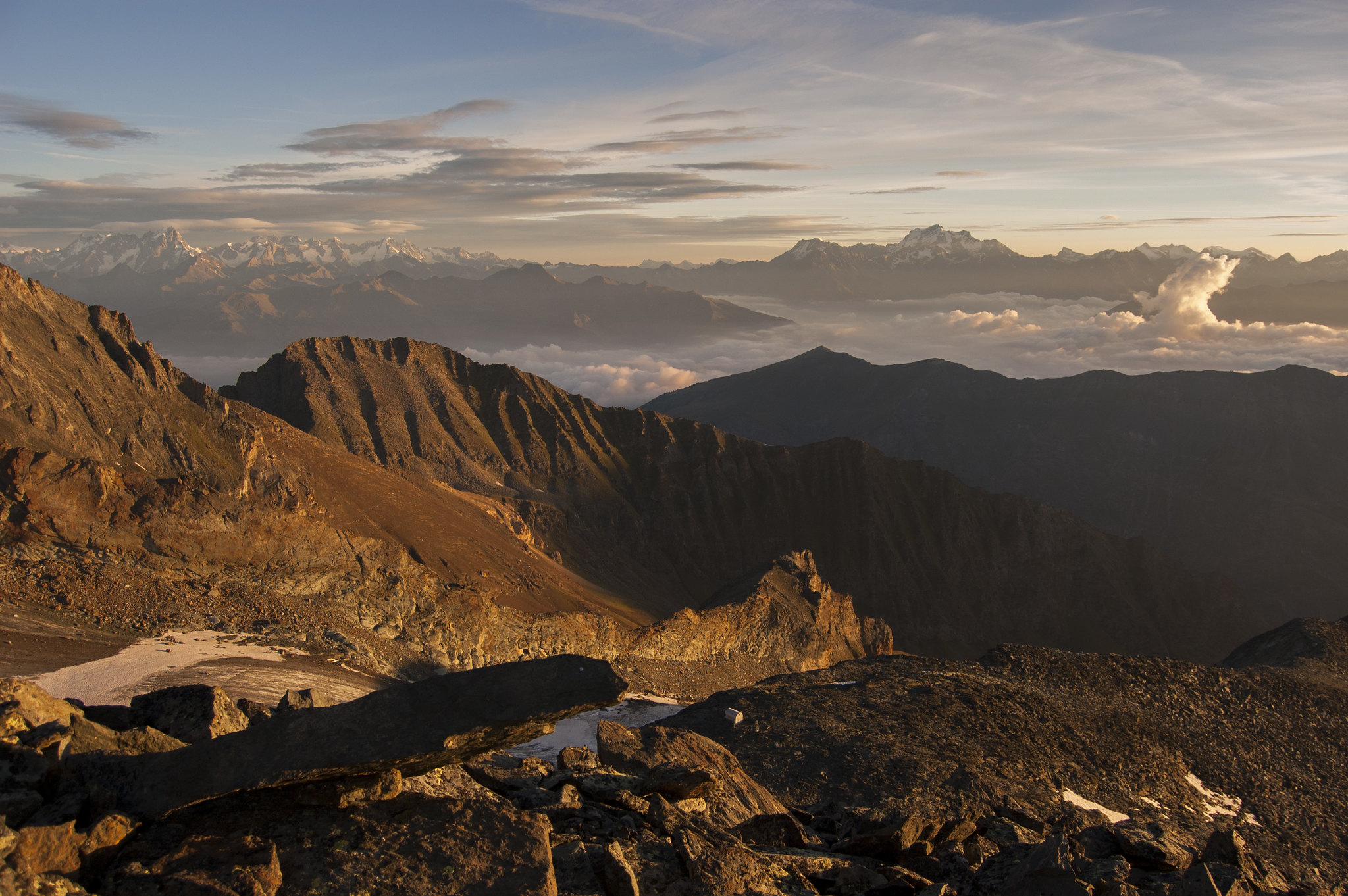 Spot the hut! The Mont Blanc range is poking out on the left and Grand Combin in the mountain on the right. 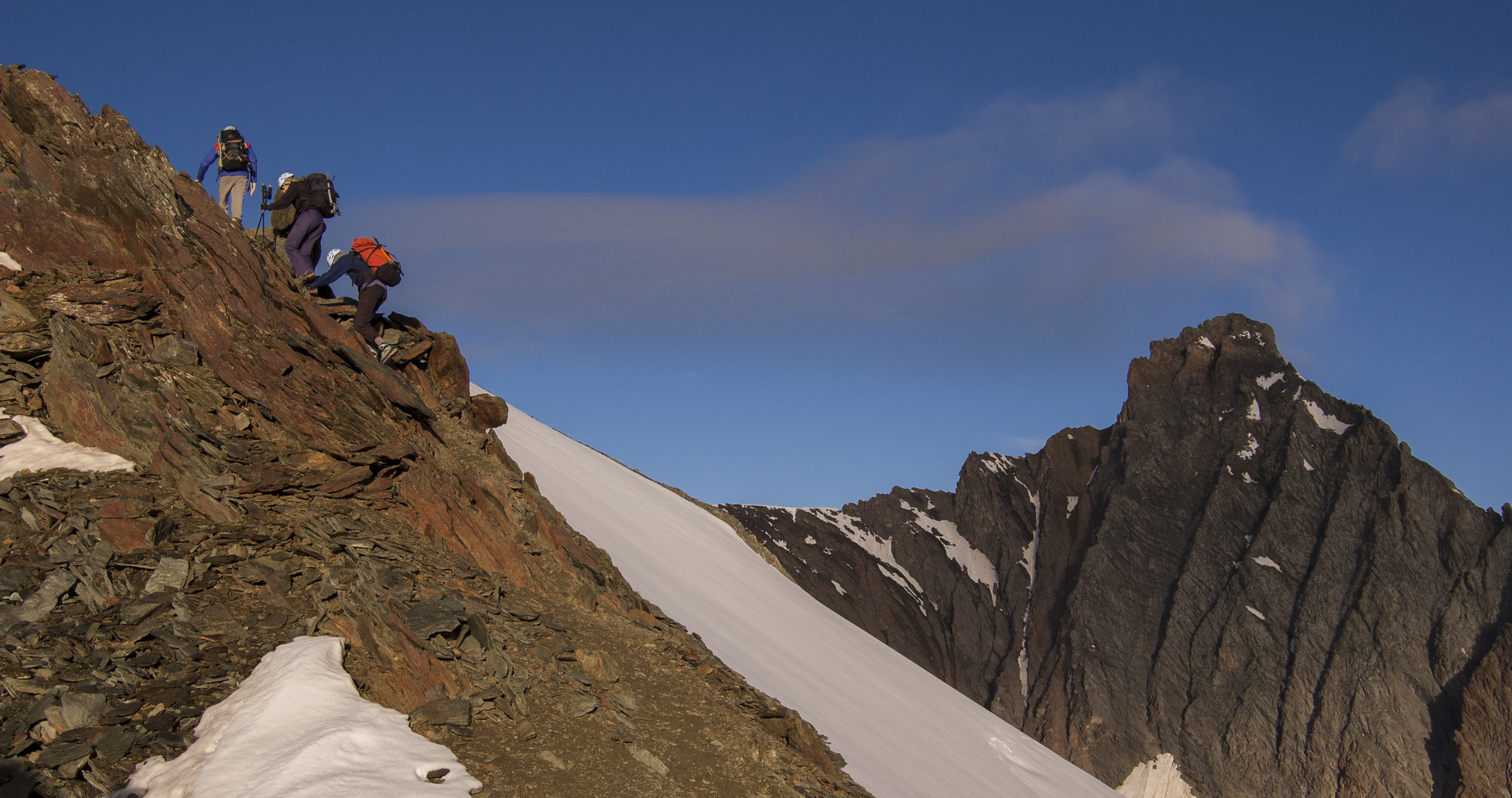 Final few steps to the summit, La Grivola in the background. 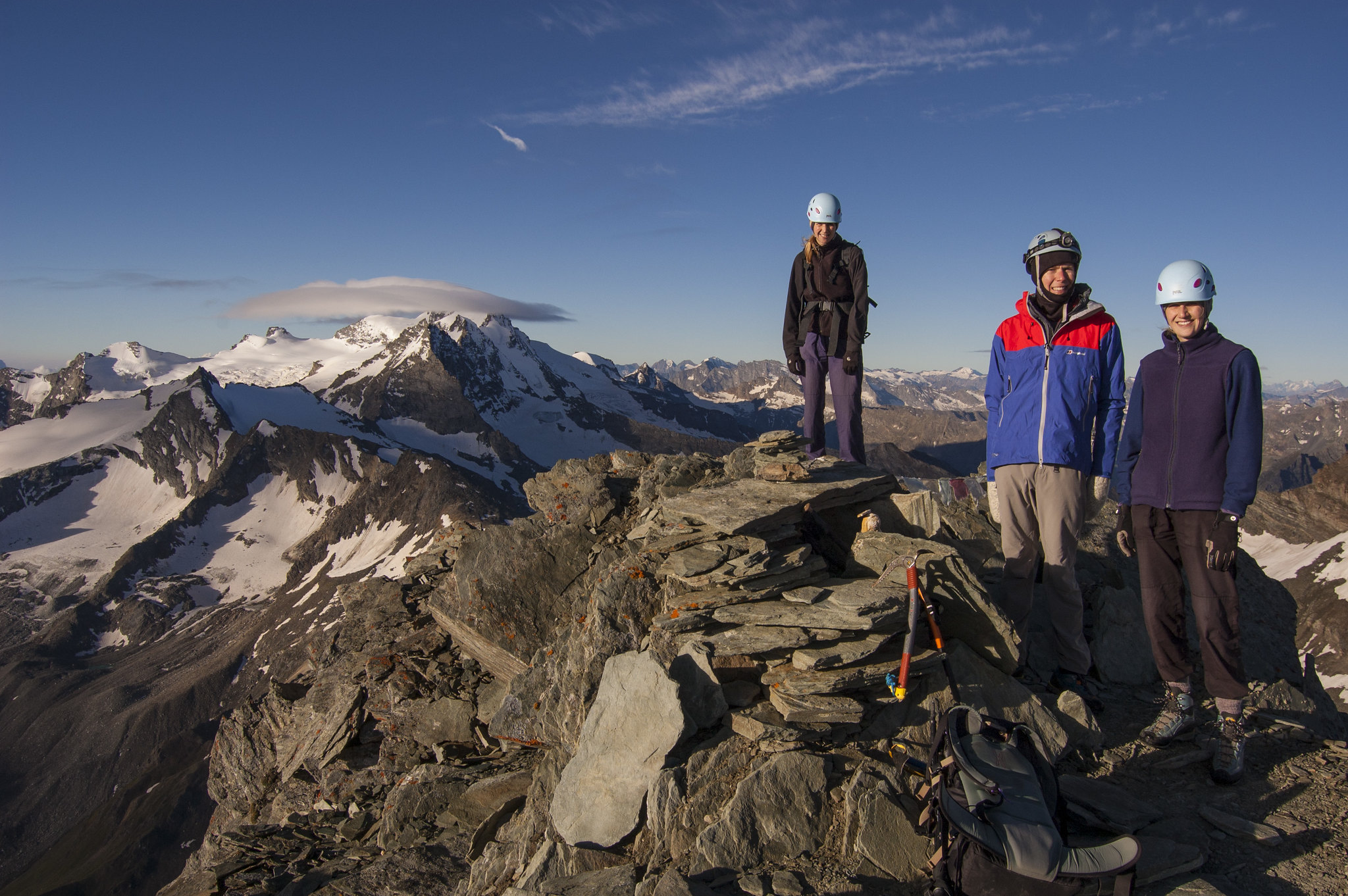 Lorna, Darren and Imogen on the summit, with Gran Paradiso in the background.

Grand Combin on the left and the Matterhorn on the right. Mont Blanc de Cheilon, Pigne d'Arolla and Dent d'Herens are sandwiched in between.
We were staying on for nearly another week and had Gran Paradiso in mind before we left. It was cool and rainy over the weekend though so we got the bus to Aosta and explored the Roman remains, whilst Sam was slightly more hard core than us and came top 30 out of 500 in the local 10km race up the valley! We then did a nice walk at Lilaz again to Lago di Loie, which is a very nice walk for a picnic!

The weather was set to be dry again so we got the "Trek Bus" from Valnontey to Valsavarenche, a 1.5hr journey for only €29 for all four of us! The only down side of this was we had to get it very early so had all day to do the 2 hour walk up to the hut. Luckily there is a cafe at the start of the walk where we sheltered whilst the weather got the last of its rain out of its system! Here we met up with Darren's parents who were doing a trekking tour of the Gran Paradiso National park and were also staying in the Refugio Vittorio Emanuele hut. We had an enjoyable walk up to the hut and arrived quite early, which gave us plenty of time to recce the start of the route up the moraines and the start of the glacier to Gran Paradiso (4062m). The next morning we left at 3.30am well ahead of the crowds! The first section after the moraines took a bit of negotiating over wet icy rocks on the right hand side of the stream running out of the first glacier, as we had already put our crampons on by then due to a small snow section. It was then very straight forward up the Ghiacciaio del Gran Paradiso and we were going strong catching up the only other group ahead of us. We got to about 3600m where we stopped to rope up and the wind was strengthening increasingly. At 3847m, just 200m below the summit, we decided to call it a day as the wind had become very strong now and was buffeting us about, clouds were whipping over the summit rocks, so as discretion is always the better part of valour we started to head down. About half an hour after we set off down we came across masses of people working there way up, it's very popular and we were glad we had set off so early! Not least because we were able to enjoy the sunrise lighting up the surrounding mountains, including Ciarforon which is a rather impressive looking mountain. After a rest in the hut we continued down and caught the bus back to our campsite. 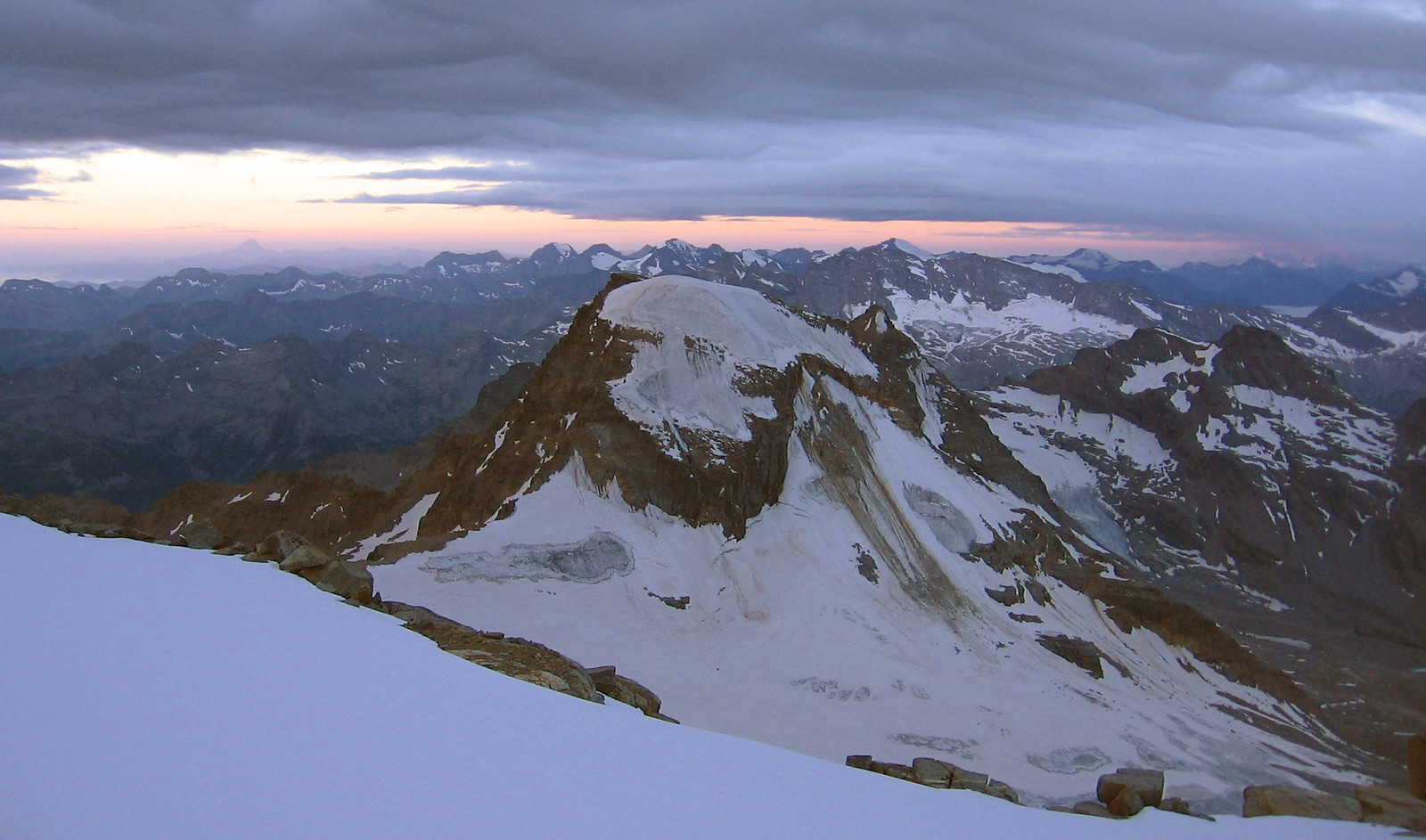 Ciarforon from the ascent of Gran Paradiso.
Darren and I travelled back via Annecy and Paris whilst Lorna and Sam stayed on for a few more days.

On the Friday they headed up to Bivacco Money, which is a 9-bed bivvy hut spectacularly positioned on a ledge high above the glacial moraines. Usefully it's painted yellow, which enables you to spot it, as you wouldn't think to look for it up there! There is a source of water near the hut, but it's a little difficult to get to; continue around the buttress (having gotten onto the ledge and past the hut) on a narrow traversing path with metal rope leading the way, to a waterfall which is at the bottom of a very loose rock slope. Beware of clinging onto unattached ropes too! 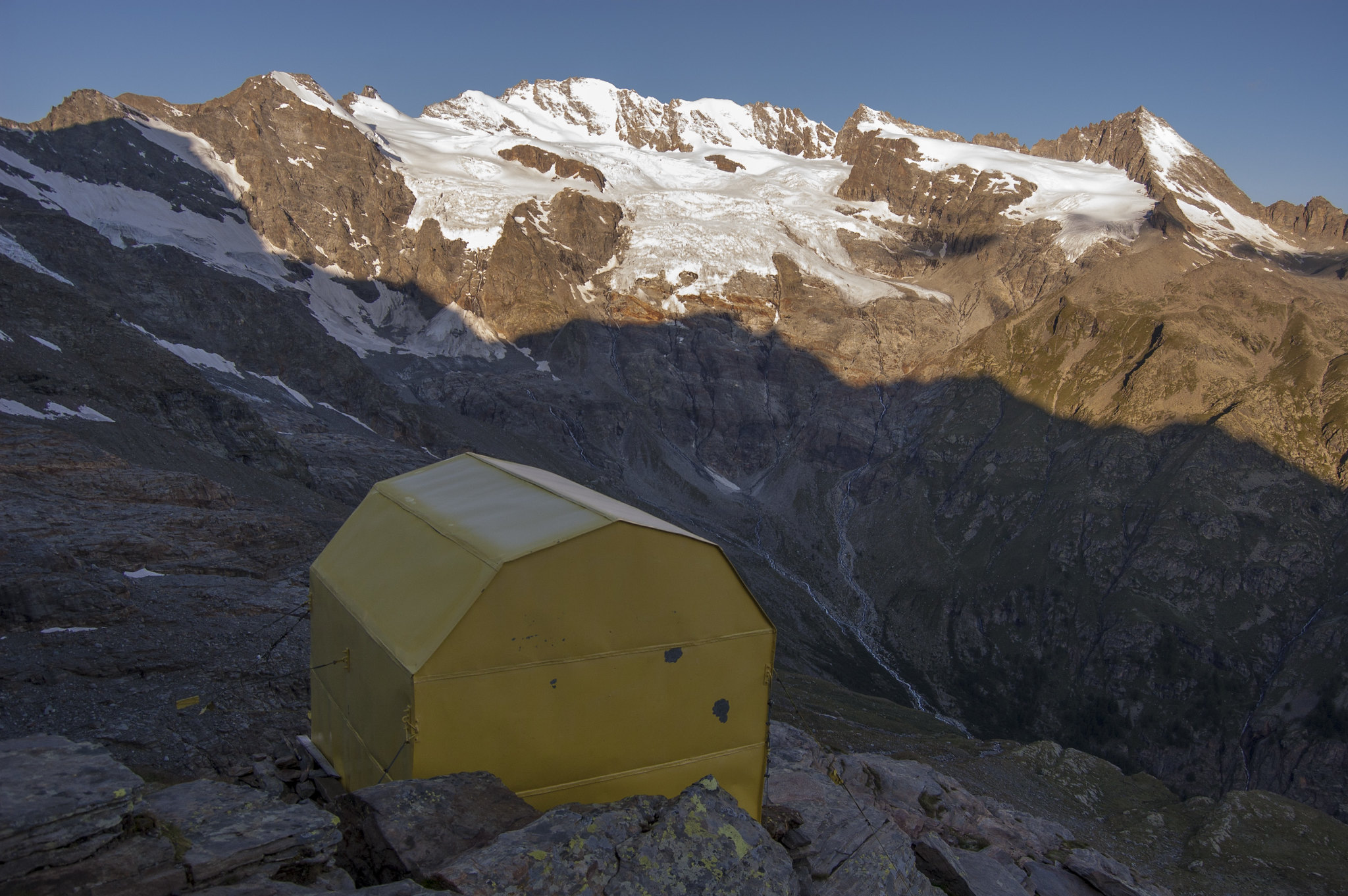 View to Gran Paradiso from the Bivacco Money.
Torre di Sant'Orso (3618m) was the aim for the next morning, so they reccied the route onto the glacier that evening to assess the glacier and snow conditions in day light, and to check out the approach which is on scree and loose rock with no obvious paths. Unfortunately their suspicions were correct and there was a lot of fresh snow covering large crevasses at the lower end of the glacier, with numerous areas of avalanche debris on the summit slopes. Hence, they decided it would be best to give it a miss on this occasion! 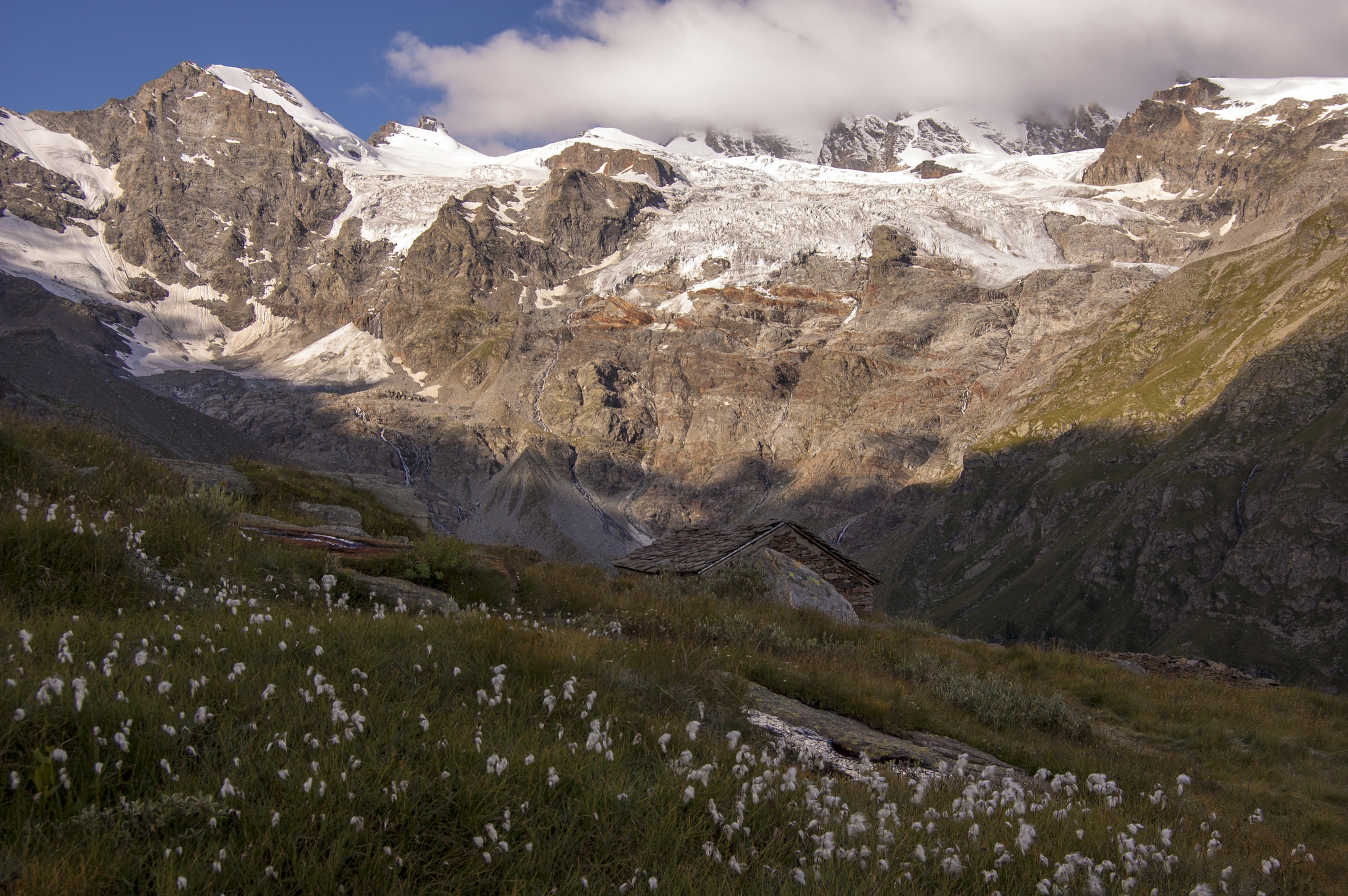 Alpi Money on the walk back down to the valley the following morning.
Their last day saw them sport climbing in Lilaz, which they were very glad to have fitted in, having lugged all the climbing gear out there! The crag of choice is nicely situated above the Lillaz cascades, with a variety of routes starting from 4b on the right of the crag gradually getting harder and harder as you move left.

All in all a very successful and fun trip despite the Alps seeming to be a lot cooler and wetter this year! Thanks everyone!